Chris joined the Hillsborough Police Department in June 1993 and then transferred to the Durham Police Department in February 1996. Chris was promoted to the rank of Corporal in 1999. He has held positions as Patrol Corporal and Internal Affairs Investigator. He is a certified Firearms/Aerosol Weapons/Rapid Deployment/Patrol Rifle and Motorcycle Instructor who graduated the Durham Police Department Basic Police Motorcycle Operator Course in April 2007. He completed the N. C. Bike Safe Assessor Course in 2010 and is a certified Child Passenger Safety Seat Technician.
Chris served in the United States Marine Corps from 1988-1992 and was trained as a Military Police Officer at Lackland Air Force Base, San Antonio, Texas. 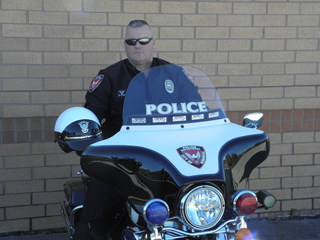