Deputy G. Headen Jr. has been with the Mecklenburg County Sheriffs Office for 20years. He has served on the Motor Unit for 10 years. Deputy G. Headen Jr. is Motor 1 for the Mecklenburg County Sheriffs Office. In 1995, after He served in the United States Air Force for 10.5 years as an instructor, He has served inside the jails, in Classifications and Arrest Processing. He then transferred to the field as a Civil Process Road Deputy. Now in his current position as a Motor Officer has produced a well rounded 20 year career. Glenn was certified as a Motor Officer by the United States Park Police in 2005. He then completed Northwestern Police Motorcycle Instructor school in 2014. He has been riding police Motors since 2005, completing many escort events including First Lady Michelle Obama for 1 week during the Democratic National Convention. The Mecklenburg County Motor Unit ride year round conducting daily operations such as evictions, traffic stops, various escorts. Glenn has also completed the North Carolina Bike Safe Program making him a proficient rider instructor. Glenn has his own personal Suzuki M109r bagger that he enjoys riding in his leisure time, taking trip to the mountians 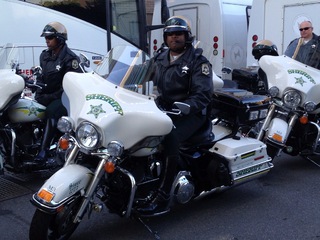